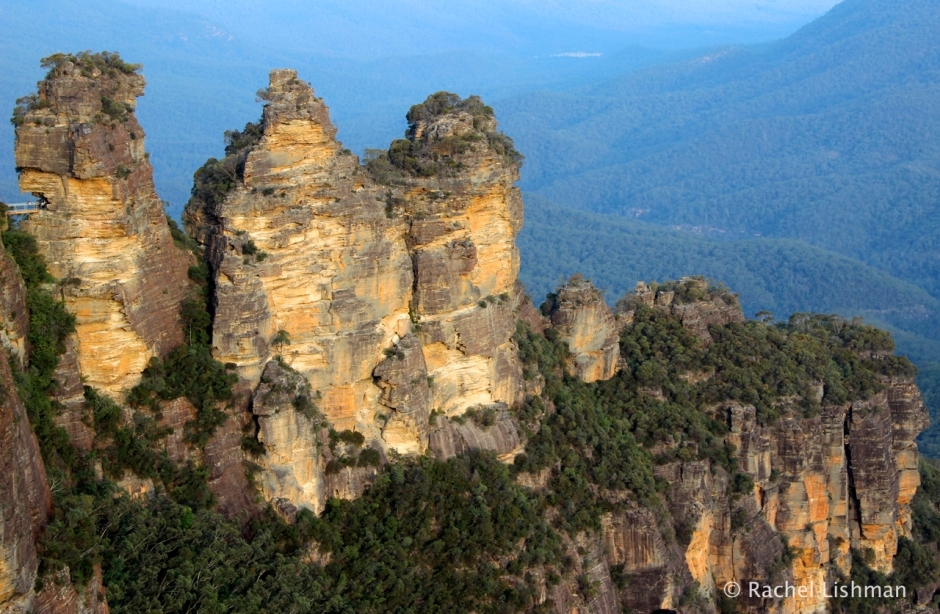 While the abrasive daily onslaught of trippers from Sydney clatter off double decker buses, eagerly clasping cameras and posing for photos with Kevin the Koala, merely meters from where they stand, nature maintains its everlasting grip on the forest canopies and desolately beautiful panoramas scattered below.

I was staying in the well-known base town of Katoomba for the weekend, in the somewhat tatty G’Day Motel. Luckily, my room was of little importance to me, as I was here to explore the famous mountains that lay only a short distance beyond, on foot and by bike.

The next morning was still and heavy with mist that almost completely enveloped the lower hills.

I panned my head around as you would a video camera and drew a staccato breath as my eyes landed on The Three Sisters. Even in the dull early morning light they glowed a bright yellow, green tufts of tropical brush poked out from various nooks in the escarpments’ faces.

At 9 am, we had beaten the day-trippers and only a few calm tourists ambled around the purpose built viewpoint, snapping photos and marvelling at the expanse that was laid out below us. If that wasn’t going to pep me up for my bike ride across the ridge, nothing would.

I’m no expert mountain biker, and the steep start was a baptism of fire, but I eventually found my rhythm, slowing on the sharp corners and complex sections and stopping occasionally to catch my breath and take photos.

The undulating ridge that I rode along gradually narrowed until the path dropped off perilously to my right. The views, however, only became more spectacular. As if Mother Nature was teasing me towards the end with the prospect of what I would find around the next bend.

Larger rocks and hardened mud turned to rattling shingle under my wheels as I reached a perfectly round clearing.

Bike nestled against a tree, I settled down to a well-earned sandwich with a view. I immediately understood how these mountains earned their name. Verdant cliff faces fell into dark green canopies below me. Into the pale aqua sky, drifted the brightest blue haze I had ever seen.

Miles into the distance, a large lake broke up the mountains and settled quietly just under the horizon.

That evening, I slumped in a local pub with achy legs and a deep-set satisfaction. The yellow overhangs and everlasting outlooks felt like another planet. It was Saturday night. Chart music thumped from the speakers and drunken teenagers were flirting around me in the latest designer gear. These locals seemed unaware of the un-trodden paths that lay quite literally on their doorstep. I finished my pie and pint and decided I wasn’t quite ready to return to the present just yet.

From top left: Blue Mountains Furnicular Railway; Waterfall in the valley; A bike route across the high plateau; Pathway under the Three Sisters; Fauna of the hikes; Ancient rock formations along the trails.

Sundays at The Three Sisters are hectic.

As I walked cautiously down the steel steps that clung to the slope, young Japanese couples strained to see over my shoulder, groups of backpackers laughed and joked about the long fall down, and small children were scooped up before the path became too treacherous.

Bird song thronged above me, echoing as it smashed against the gigantic walls on either side.

The daylight was dragged away as the foliage thickened and the air cooled dramatically. Branches thick with lichen leant and lurched over the path. Stubby palms bounced as birds took off from their leaves. This was an earlier world. One where cars, gift shops and craft beers were yet to be invented: A prehistoric pleasure of lush vegetation, crashing waterfalls and shy little animals.

After a few hours and another beautifully solitary packed lunch, I tumbled once more into the modern day, in the most peculiar way. Scenic World’s Scenic Railway has developed a novel way of plucking hikers from the deep valley and depositing them atop the cliffs next to a very conveniently situated souvenir shop.

In only a few minutes, my day’s walking was undone as I was transported upwards, backwards and forwards in time to my final stop.

Kids squawked over novelty pens and garish toys as parents gave in to overpriced coffees. I took it all in, safe in the knowledge that I’d truly seen both versions of this beguiling tourist spot.

Is it wrong that these worlds survive simultaneously without ever colliding? That some of us will spend all day hiking but avoid the shops like the plague? That others will never set foot atop a deserted ridge but will have the time of their life in the amusement arcade? I don’t think so. The truth is that Kevin the Koala needs a hug, just as much as the barren bush needs to be explored. Both, I think, are an authentic Aussie experience.

And for those willing to dip their toes into both Australias, the reward will be worth the confusion.

14 thoughts on “An Adventure Weekend In Australia’s Blue Mountains”