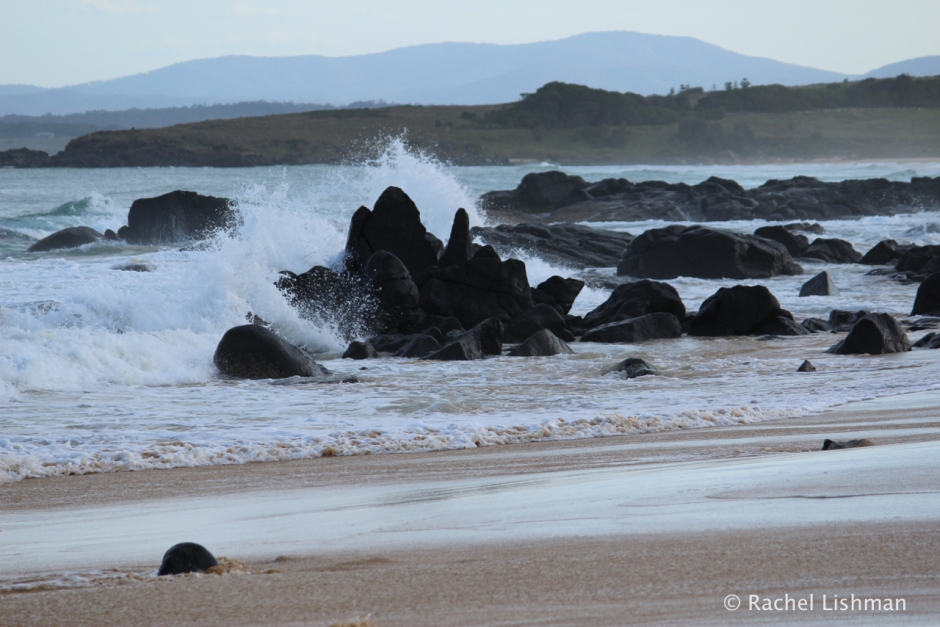 I wake up slightly disoriented and quickly tug at the zip. A tepid breeze sifts through the tall trees overhead, casting flecks of sunlight on the leaf-littered forest floor.

A mild morning glow touches the branches of eucalyptus and bird calls echo towards the ocean. Only the occasional bark of an excited dog pierces the tranquillity of pre-breakfast contemplation at Mystery Bay.

A stone’s throw from one of New South Wales’ many coastal towns, there’s a campsite with a view. Just a short drive from Narooma, you can pitch your tent in untouched woodland that drops onto a perfect stretch of sand. As you gaze out to sea, if you’re really lucky, you’ll glimpse whales breaching on the horizon. These colossal creatures make their annual migration along this coast, for what seems like a private sideshow for Mystery’s campers.

I fight the temptation to hold my camera to my face, as I spy the ocean giants for the first time. With White Bellies they lurch and spin above the waves, a split-second tease before returning to their underwater home. A few dolphins playfully join the action, as if jealous that their larger compatriots are hogging the limelight. As the waves crest, my lucky camera lens is just able to catch their streamlined silhouettes.

Orange dawns and purple sunsets sandwich warm but often, windy days spent swimming, strolling and collecting firewood. Minutiae, ignored in daily life, slowly come into focus; The spirals of shells in all their detail, the myriad swirls of white clouds overhead, the behaviours of seabirds that gather in a cackle on jagged black rocks, and the glittering contents of shallow rock pools.

As the light reluctantly gives way, darkness turns the bay into a different world. Long shadows skip across friends’ faces as we cook by the fire, its crackle and pop exaggerated against the silent backdrop. The shoreline is merely a memory of daytime, not visible behind the camp’s protective foliage. All that’s left of the gigantic ocean is the muffled roar of crashing waves.

Suddenly, a rustle penetrates the blackness above our heads as a small animal jumps among branches: A possum maybe? Its movement shatters the quiet. Its flashing eyes momentarily caught in the beam of our torch. The vulgar beauty of a sunny day is quickly replaced by the eerily sumptuous night. Long after the campers have drifted to sleep and the fire’s warmth has receded, its embers smoulder a rich ruby red. At the onset of dawn, as if it had all been a dream, the last cinders turn into a feeble puff of smoke.

The world turns a little slower here, and you’re acutely aware of it. And so, the only mystery that remains about Mystery Bay, is why more tourists haven’t already discovered it.

It will be our little secret.

10 thoughts on “Camping At Mystery Bay In New South Wales”