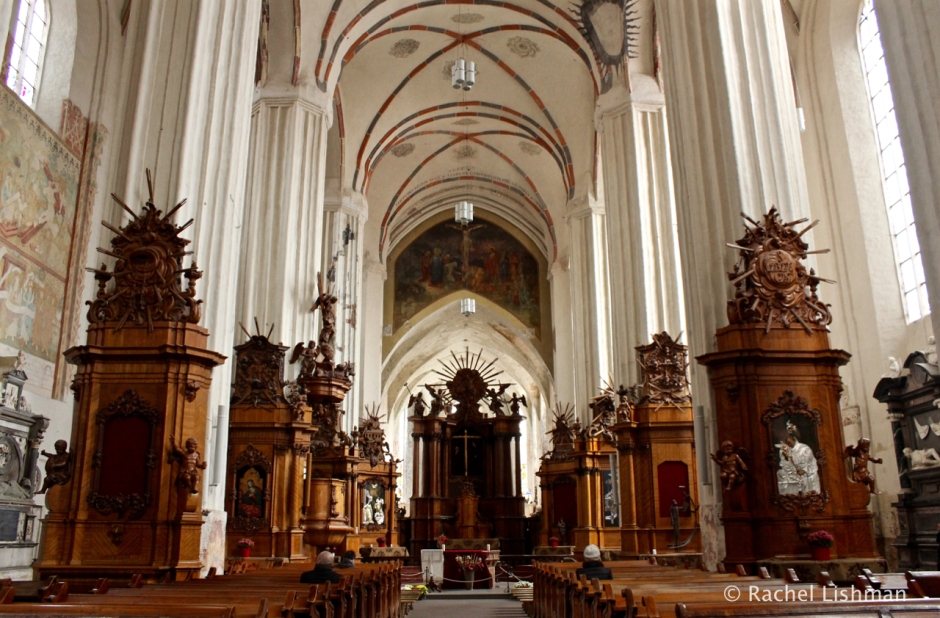 A drizzly day in Vilnius can be deceptive. Rain hits the greys of dilapidated tower blocks and the cobbled streets of the old town are shiny underfoot.

Serious faces peer from characterless coffee shops at the dreary city through the window. However by looking a little closer, from derelict churches to nondescript kindergartens, a very different Vilnius appears.

Entering the history books as a settlement for the first time in the 14th century, the area has actually been inhabited since ancient times. The winding medieval streets of the old town, although heavily damaged and sometimes insensitively restored over the years, still show a glimpse of the middle ages, through tributes to pagan gods, hidden courtyards and thick windowless walls.

Like the other Baltic countries, Lithuania has suffered countless wars and occupations over the centuries. From 1569 onwards it became the rope in a territorial tug of war between the Russian and Polish empires. This cast a heavy influence on the city’s later architecture, which bears a striking resemblance to Poland’s Krakow as well as embracing the soviet layouts of Russian cities. German Street sees a wide avenue sliced in half, with soviet balconies on one side and German arched doorways on the other. Locals now joke that businesses suffer on the soviet side, and even an Apple Store recently closed down.

The Lithuanian people were originally a pagan society but underwent forced conversion to Christianity in the later middle ages. Today, the majority of the population identify with Roman Catholicism and there are 28 churches in the old town alone. Their spires puncture the low rain clouds and dominate the skyline from every vista.

With supposedly one church for every 700 inhabitants, many religious buildings aren’t used and have fallen into disrepair. My young guide told the story of one that was turned into a shrine for what Lithuanian’s jovially refer to as their second religion: basketball. For years, players slam dunked under the watchful eye of Christ until it was eventually deemed insensitive. Today, another church houses something even more crucial to modern living: a mobile phone signal mast!

Once upon a time the city boasted almost as many Synagogues. It’s sobering to consider that a potential 95% of Vilnius’ Jewish population were killed, injured or sent to concentration camps during World War II and their places of worship destroyed. Vilnius’ largest synagogue could house up to 4,000 people due to ingenious underground excavation and was claimed to be Europe’s largest. In 2015, in a bland courtyard framed by dreary housing, a nursery school is all that stands in its place.

Sadly, the violence against the city’s people didn’t stop with the end of the Second World War. On one of today’s most bustling streets, amid designer stores and adverts for free Wi-Fi, an ornate façade is inscribed with names on every brick. These engravings form a recent tribute, on the outside of a building in which members of the Lithuanian Resistance to soviet rule were persecuted. Until as recently as 1991 the KGB, as the latest incarnation of a corrupt and violent secret service, undertook surveillance, torture and over 1,000 executions here.

The KGB prison was turned into the informative Museum of Genocide Victims shortly after its closure in 1992, and today provides visitors with a sombre insight into the atrocities faced by previous inhabitants. As you look into padded cells, solitary confinement cubicles and what can only be described as basement execution chambers, you are reminded of what this country and its people have endured.

Despite a history blighted by oppression, an independent Lithuania thrives in 2015. In January it adopted the euro and tourism is becoming big business in its capital. A short bus trip across the river takes people into modern Vilnius: a world away from the old town cobbles and wooden houses of its oldest suburb. The National Gallery – an architectural ode to modernism, a sport stadium, high-end hotels and the glassy reflections of a brand new financial district make for a positive end to a visit.

If you’re lucky enough to catch the opening hours of the Radisson Blu bar, you can sip a cocktail while reflecting on the colourful patchwork of Vilnius’s history: a shopping mall fronts the view, gradually giving way to the white marble of the city cathedral and the 19th century buildings that line the river. In the background, the medieval town twists and turns its way upwards towards a still, monochrome sky.

6 thoughts on “Behind Closed Doors: A Brief History Of Lithuania’s Capital”