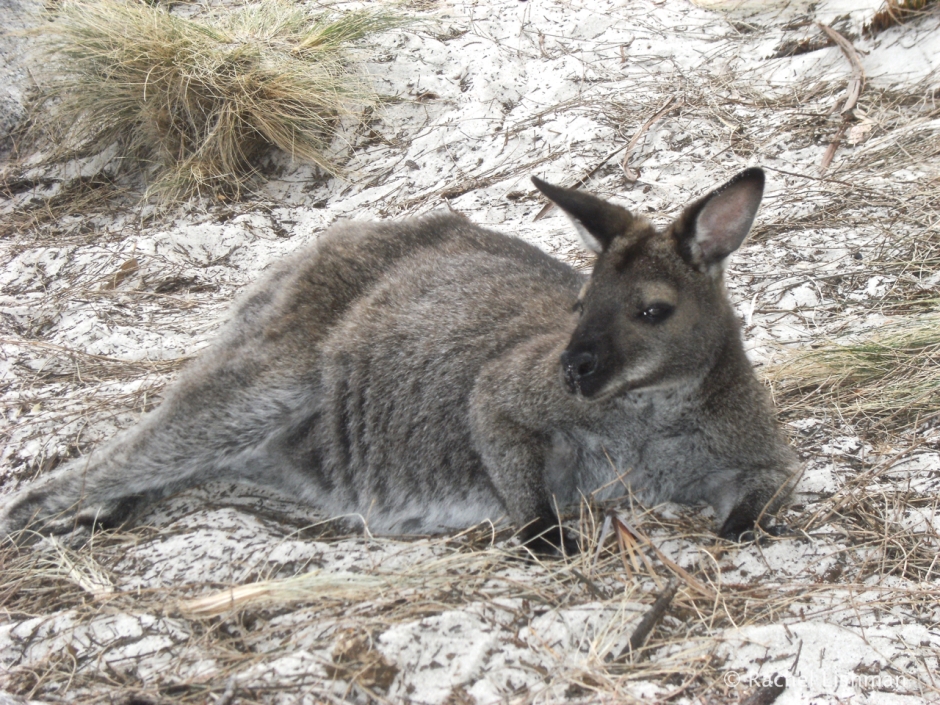 I thought I was hallucinating when I arrived in Bicheno. In the middle of the campsite sat another vehicle exactly like mine: A compact campervan covered in purple and yellow flowers.

Bicheno was a pause on my flower-powered loop of Australia’s southernmost island. In the literal sense, it’s a trip overseas. However in common Aussie lingo most would admit that it also seems like a trip overseas, which means ‘abroad’. This heart shaped isle on the fringes of the South Pacific feels very different from mainland Australia, and the city of Hobart was my starting point for a circular exploration.

Hobart resembles a fishing village more than a state capital and has a reputation for great seafood. I ate fish and chips on the harbour and was also lucky enough to catch the annual Taste of Tasmania food and wine festival. Although small, Hobart also packs a punch with activities to keep even the most demanding visitor occupied including: the award-winning Museum of Modern Art, Mount Wellington and a fascinating maritime museum.

Time travel in the windy southwest

It was eventually time to stop eating and get driving. In my campervan I headed west through a wilderness of steep ravines to Strahan. Often accused of foul weather, its main draw is an excursion into ancient temperate rainforest via the penal settlement of Sarah Island. A guided tour takes you back in time to the first barren convict colonies of Australia, shortly before walking through Huon pines that are often over 500 years old.

Scrambling to the summit at Dove Lake

Even in summer, the weather isn’t always kind in Tassie. In Lake St Clair National Park there’s an abundance of great day hikes and I set of under rolling grey skies to climb Cradle Mountain. A tough ascent levelled out onto a spectacular ridge, with a view of several surrounding lakes. For the final push, I found myself scrambling over huge boulders against worrying drops as I approached the peak. With all the expansive views, it was easy to forget the area’s abundant wildlife but the wombats, echidnas and rock wallabies made sure I spotted them in the car park on the way out!

The guidebooks tell you about Bicheno penguins, who hop ungracefully out of the waves each night to return to their nests. It was a magical moonlit sight and certainly worth the wait on neighbouring rocks. Penguins and the matching campervan revelation aside, there was another highlight of my time there; the best lobster I had ever tasted.

No trip to Tassie would be complete without seeing its most famous animal: The Tasmanian Devil. Although they look cuddly, these little critters are actually ferocious. Sadly, the species is endangered due to a virus that’s wreaking havoc within their small population. I visited a sanctuary that helps many weird and wonderful animals, however the little devils get their own show that times nicely with their daily feed. Watch your fingers!

The east coast provides a stark contrast to the wet, windy west. White sand beaches spattered with large smooth boulders and a crystal sea fringe the entire Freycinet peninsula: a camper’s paradise. I stayed for free at Friendly Fires and my morning view has since made it into my top list of world beaches. I managed to drag myself away from the stunning panorama to hike at Wineglass Bay, which was only a short drive from the campsite.

I had almost come full circle as my drive south ended at Eagle Hawk Neck. Not only did the area boast radical geology in its tessellated pavement, but also was home to underwater giant kelp forests and one of the oceans’ strangest little characters. I spent a day scuba diving just of the coast in order to catch a glimpse of a weedy sea dragon. There aren’t many things worth being that cold for!

An eerie visit to Port Arthur

The final destination of my Tasmanian adventure was Port Arthur. Originally a timber station that was turned into a convict settlement, it provided an insight into the lives of exported convicts who had arrived at the shores of a very different country all those years ago. Today, the area is unfortunately also known for a massacre that took place in 1996. More than 30 people were shot and killed by a young man from Hobart. The event spurred a law change throughout Australia, which now has some of the strictest gun laws in the world.

8 thoughts on “Powered By Flowers: An Itinerary For Tasmania”