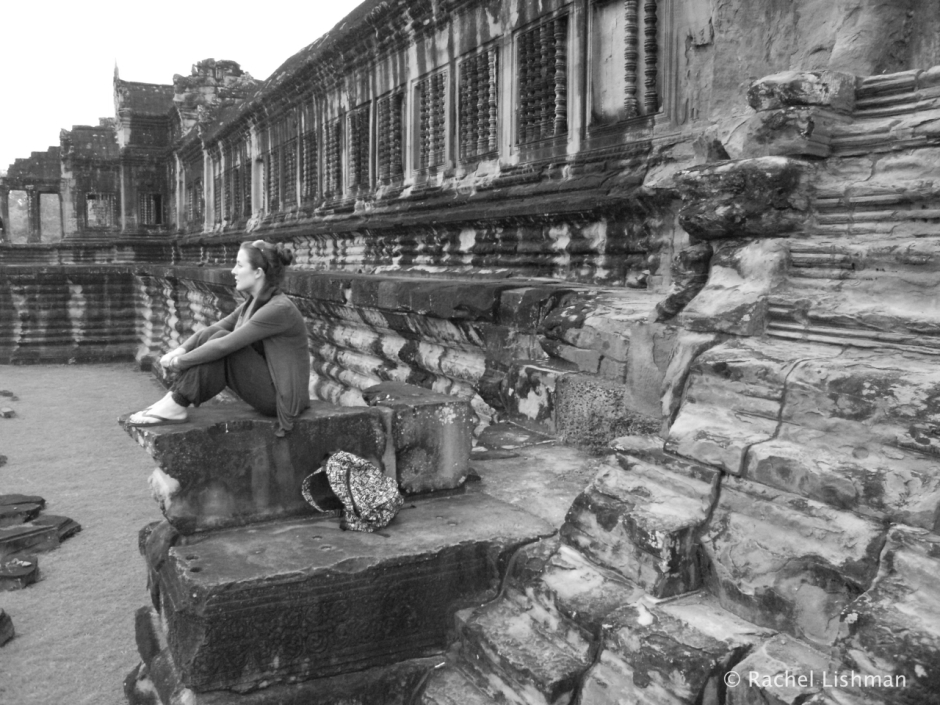 The thrum of mopeds darting down back streets was the lullaby of Siem Reap.

It wasn’t The Garden Hostel’s fault that I was still awake at 3am. Their raised bamboo platform, double mattress and matching mosquito net for $1 a night were comfortable enough. The challenge was that it was a sticky 37 degrees outside. And I was for all intents and purposes, outside.

I had arrived into Cambodia a few days before with growing confidence and new friends and had realised very quickly that the silohuette of ancient Angkor Wat permeated everything. From beer mats to tattoos and even the national flag. After all, it was the sole reason I was there. For the town of Siem Reap the Khmer Dynasty was still very much alive. Not only was Angkor Wat only rediscovered in the 1840s, its visitors were now helping to regenerate the area and propel Cambodia’s tourism industry into the 21st century.

For the next two days I experienced Angkor first hand.

A father and son duo were my hosts for days out at the temples. We chatted non-stop in their creative tuk-tuk about the origins of the Dynasty, the recently exposed architecture of outer temples and the mystique of their surroundings but nothing prepared me for stepping through the gates at dawn. I marched past the lines of tourists angling for a sunrise shot behind that famous silohuette and went straight inside.

The main temple of Angkor was as well preserved as any modern palace, all neat courtyards, controlled facades and pristine engravings. Daylight broke over its stone walls without a fuss, begrudgingly playing second fiddle to the manmade wonder. Bayon, my favourite temple, was the polar opposite. All voluptuous curves and blended faces, its corridors worked on the brain like magic eye illusions: frames within frames within frames.

The Khmer Empire officially ended in the 15th century, although as I worked my way towards the outskirts of the temple complex, there was still a battle in full flow. As if keen to finally overthrow the ancient rulers of Cambodia once and for all, the flora had successfully reclaimed stonework in a seething revolt against the structures. Some smaller temples were positively dripping in jungle.

Comparing that world with Siem Reap’s backpacker bars and humming street food markets made no sense and yet they were now intrinsically linked. It was ticket money that was helping to preserve and uncover more of Angkor’s ruins than ever before. And yet I found it impossible to conjure those carved faces and the history they represented from the confines of my hot mattress.

“Angkor is still a lost world in many ways” I considered, still struggling to sleep. It draws visitors from around the world to marvel at what is really only the tip of the iceberg. Angkor Wat’s power lies in its mystery, its solitude and the secrets that its jungle home still holds.

2 thoughts on “The Enduring Mystery Of Angkor Wat, Cambodia”